I’m a guy who loves philosophy. I would like to spend many, many, many days reading the great philosophers, something I denied myself by not dedicating myself to college. Trolling around through summaries of some of Plato’s dialogues earlier this week, I ran across one that I had seen before, but that for some reason struck me as very much like my experience trying to explain my shedding of faith to my still-believing friends.

Plato’s Cave is a well known and well-worn dialogue about the nature of the philosopher and enlightenment. It goes something like this (and may the better educated among us forgive me for my stilted attempt:) 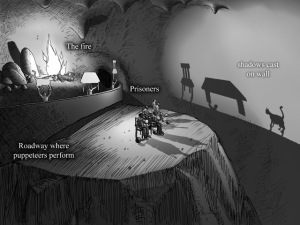 In a cave there are a number of prisoners who have been there since the day they were born. They are shackled and their necks chained in such a way that they can only face the large wall at the back of the cave. They cannot even see each other, though they can communicate.

Behind the prisoners is a wall that runs the breadth of the cave. Behind that wall is a large fire. From the front of the cave comes faint, diffused sunlight through the cave mouth.

Between the wall and the fire, actors walk back and forth, themselves hidden by the wall, holding up puppets and figurines and such in the shape of real world objects and beings. The shadows from these objects create shadows on the back wall of the cave. To the prisoners whose gaze is fixed on the back wall of the cave, these shadows are all they know of life, as they’ve never seen anything else in their lives. The perceive these shadows as real objects because they have no relative experience to inform them otherwise.

Suppose then one of these prisoners is freed, having looked at nothing but shadows all his life. He is forced to turn and sees the fire. The fire hurts his eyes, and so before he can make out any of the objects being held up, he scurries back to the comfort of his familiar experience at the back of the cave. To him, the shadows are the reality he knows and is comfortable with. Rather than face the blinding light, he returns to what he’s used to.

Suppose then the prisoner is forced not just to turn around, but is dragged out of the cave into the sunlight. His first glimpse of the sun is blinding and he turns away from it. But his comfortable reality is too far away to just return to. As his eyes adjust to the sunlight, at first he sees only shadows. Then perhaps he sees reflections of real things in a nearby lake, trees, animals, people. Then he sees those things himself. Eventually he looks up and sees the sky, the moon and the stars. Finally, when his eyes have acclimated enough, he can look up and see the sun that illuminates everything else. He can start to reason about the sun and all the things he sees.

Seeing this real world as far better than the one he left, he would feel sorry for his fellow prisoners and seek to convince them to join him outside the cave. When he returned to the cave, he would be blind in the darkness, much as he was blinded by the sun when he first was dragged out. His fellow prisoners would think that being outside the cave had harmed him, and that they should not allow themselves to be dragged out too. They might even kill or harm anyone who tried to do so.

Though I don’t believe it is stated (I can’t read Greek, you know) any exhortations he made to his friends would sound like the ravings of a madman. They would have no frame of reference to even understand what he was trying to describe. The text does say he would be ‘ridiculous’ (one translation, anyway – I haven’t read others) though this could be down to his impaired vision alone.

So, how does this relate to my deconversion?

Early in my post-Christian life, I tried to explain myself to a Christian friend of mine, who I call Titus for the purposes of this site. I said to him something to this affect:

You and I have lived on the same side of this tall wall and all we ever see is this side of the wall. Now I have climbed over the wall and I see what it looks like in all its glory. But when I try to describe it to you, you can’t relate because you’d have to see it too. But you can’t see it unless you actually climb over the wall, and once you’ve climbed, there’s no going back.

The reality that I try to describe and share with Christians is impossible for them to relate. Why? Because even if they try, they can only understand in relation to the shadows they see on the cave wall. Until they actually climb out and experience this other reality for themselves, we’ll spend most of our time talking past each other.

It’s a frustrating thing, truly. Despite my desire not to do so, I find in my Facebook and other online interactions that I will eventually (and ever more quickly these days) default to simply calling a theist stupid and walking away, or worse, calling a theist stupid, then sticking around for his or her response so I can then pile on the vitriol even more. It really isn’t fair, and really isn’t what I’d wished to foster in myself at the beginning of this journey.

I think we as atheists and self-proclaimed free-thinkers owe it to ourselves and those who are still staring at shadows to recognize that we perceive the world differently and have more patience in our interactions. At least more than they have with us (which on anecdotal evidence seems to grant us a lot of leeway.) We need to recognize that most of these believers are people of intellectual capacity, decent hearts, and good intentions, whose reality is defined by those shadows, the indoctrination of their youth and adulthood, and do a better job of keeping the vitriol out of dialogue.

Not that our conversations should be staid and placid. Not that we shouldn’t hold our ground and insist on intellectual consistency and honesty in our debates.

Hell, I would even argue that ridicule and mockery sometimes have a time and place, but one must know their audience.

Christians think they’re trying to save our eternal lives. We’re just trying to encourage them to dig deeper, to realize that they’re wasting a good chunk of the only life they’ll have on an empty promise.

I will do better.

Well, most of the time anyway.

6 thoughts on “Caves of Chaos”